Discovery Pens make art accessible to people with visual impairments by playing audio descriptions of the works, as well as statements by the artists and curators of the exhibition.

The Butler Gallery is delighted to present The Talking Earth by Amy Walsh, an artist who works primarily in video, photography and digital media.

The wonder of the night sky has been constant since the dawn of civilization. It has inspired countless generations of poets, scientists and artists. Amy Walsh has created two interrelated bodies of work that were photographed in artist residencies in New South Wales. Songlines was shot in the Shoalhaven area of NSW at The Bundanon Trust in December 2012 and The Talking Earth was shot at The Broken Hill Art Exchange in the City of Broken Hill in the far west region of NSW in July 2014.

In these images, Walsh uses the night sky and the landscape to explore ideas of temporality and place. Drawing on elements of cartography, astronomy and the speed of light, the stars are used to represent both the present and the past. The work also references the indigenous use of the land and local stories. Songlines directly references the paths that cross the Australian landscape and sky within Aboriginal Culture. These paths are akin to maps and are marked by trees and objects within the landscape. When one stares at the night sky one is looking at the past. However, animation of the stars across the night sky makes the viewer aware of the rotation of the earth, which in turn highlights the temporal, the present and the future.

We are very grateful for ADI’s support, guidance and expertise throughout this process and look forward to welcoming new audiences into the Butler Gallery as a result 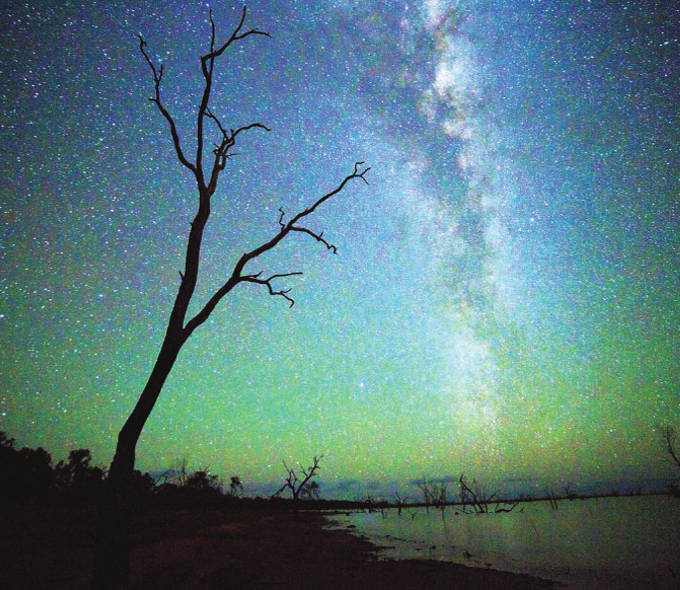