You are here: Home / What's On / Visual Art: Borderland by Eoin O’Malley…


Since starting to paint in 2008, using his mouth to hold his brushes, Eoin has developed a signature style of mark making.

He works mainly in acrylic on canvas, but also with brush and ink on paper and has recently been experimenting with direct print techniques.

The title work of this exhibition ‘Borderland’ reflects the place Eoin has arrived at in his journey as a painter and also alludes to his ambition for the future, that territory beyond the border, moving on from the foundation he has built working steadily over the past eight years.

The essence of Eoin O’Malley’s work as a painter is the energy he transmits in all of his images. Eoin’s source material is often found in the mountainous landscape around his home in Baltinglass, Co. Wicklow, but also in looking at astronomical phenomena and images of the world as seen from above.

Alongside the colourful, energetic and vibrant canvasses in this exhibition Eoin will also be showing some of his smaller work, no less exuberant but with the delicate touch and concentration brought by the use of brush and ink.

In 2014 Eoin exhibited in a group show called ‘From the Mountains to the Sea’ at the Courthouse Arts Centre, Tinahely along with other artists who have disabilities. He has had two solo exhibitions and has had the opportunity to show his work in other group shows in Co. Wicklow.

To complement his development as an artist Eoin completed a course in the history of art in 2012 and as part of his practice he keeps a digital notebook of reference material and imagery that interests him. 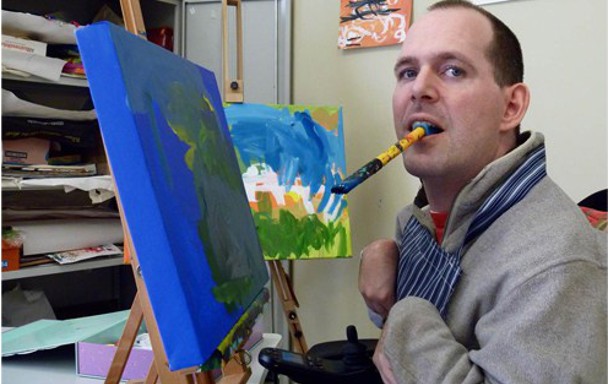 Eoin will also present an insight into his life and practice as a painter in a 'Meet the Artist’ event on Saturday 16th July at 11am.