As part of our Meet an Artist series of interviews, this month we chat to Ruth Le Gear, visual artist. Ruth’s practice emerges from collaborations and fieldwork projects which examine the qualities of water and the memories held within. Le Gear works with various water bodies including Arctic icebergs, the Baltic Sea and Irish lakes and waterfalls. Her practice finds form in moving image, the still image, sound, and installation.

What is your name?
Ruth Le Gear

Tell us about your art?
My practice mediates between nature, water remedy intervention, and environmental art. My practice and research emerge from collaborations and fieldwork projects which examine the qualities of water and the memories held within. I work with various water bodies including Arctic icebergs, the Baltic Sea and Irish lakes and waterfalls to listen to the mystical, mythical and metaphysical forces that act upon and interact with these water bodies. My work finds form in moving image, the still image, sound, and installation.

Where are you based?
I am based in the North West. I have just moved into a studio in The Model, Sligo.

What are you working on at the moment?
I am currently working with desert waters. Last year I completed a water rights residency at Santa Fe Art Institute in New Mexico and also joined the Land Arts of the American West (LAAW) program as a visiting artist. I plan to investigate the waters of the desert further through water remedies which I will make from my collected water samples. The remedies which I will make form tiny poetic time machines where each sample is explored to see what was held within. These outcomes will later be translated into film installations. To me waters are recorders of information. They record time and water also holds the key to unlocking itself, alchemy within water. This work will be explored further with Kaitlyn Bryson an artist who I met on the LAAW expedition. She will come to Ireland to work with me over the coming months on remediation of the waters and bring the remedies back to the polluted rivers and water bodies in New Mexico.

Can you tell us a little bit about your career path as an artist?
I studied Sculpture in GMIT in 2007. I was very fortunate to have my degree show piece Teardrops in Wonderscape shown as part of Eva International in 2008. I was granted a residency at Fire Station Artists’ Studios in 2011 supported by Arts & Disability Ireland. In 2012 after a wonderful supported, contemplative time in Fire Station I travelled to the Arctic and spent a number of weeks upon a tall ship on an Arctic Circle residency. From there after some time in Berlin I returned to do a residency at Leitrim Sculpture Centre and have stayed in the North West since then. I was awarded an Arts and Disability Connect award in 2015 which allowed me the time and space to create a comprehensive body of work and a publication Water Senses.

How did you get to where you are now?
Lots of work, lots of not taking rejection letters personally, applying for as many things as was humanly possibly. A lot of naps, cake and swims. I spent a number of years undertaking a lot of residencies. That really allowed for an expansion of my practice as well as creation of a very interesting network. It took a lot of trust in the work and the realisation some years ago to follow the work. It leads the way.

You are a recipient of an Arts and Disability Connect Award, how has this impacted your career path as an artist?
This award has just been fantastic. It allowed me to take time and space to create a publication. This award has also allowed the development of my practice through the access of specialist ecological knowledge. It provided the opportunity to work with ecologists, botanists and digital archaeologists which expanded the creative possibilities of my current practice through a merging of art and ecological methodologies. This process led to new creative strategies that synthesize environmental science and land art as well as the sharing of knowledge and water remedies. I also learned that moving at a glacial pace is not a bad thing for my practice. Great things like the Glenade Valley come out of moving at a glacial pace. Being able to work with Padraig Cunningham from Pure Designs to design my publication Water Senses was also leap in my practice. The way in which this work is now presented allows me to great a much greater audience.

The Arctic. I never thought I would be able to go, that I would be able to do it or if I would come back. It was such an immense shift in my practice experiencing that place and working with the iceberg remedies. The waters sit over my desk in the studio today and I wear a vial of the Magdalena remedy around my neck.

Nowy Port was also a pivotal point for me. I was invited on residency to The Łaźnia Centre for Contemporary Art in Gdańsk. Nowy Port is a heavily industrialised port. It is where the first shots of World War 2 are said to have been fired. I arrived there in spring on my research residency to sun and light and when I returned to Ireland in November I desecended under a dark cloud of fog unlike anything I have ever experienced even in the North West. I found it grim and dark and heavy and was not quiet sure what I was going to do with a remedy from the waters of Nowy Port. When I did make the remedy it was so light and bright and pink! I was so surprised I made it again as I was sure I had somehow mixed it up with an iceberg remedy. I explored this remedy for a long time and realised that we cannot turn our backs on these places that seem polluted and damaged. They have the power to emit such light and the water having been through such darkness in its equal opposite is just so light. This is one of my favourite remedies to work with now and it has shifted my perspective from the primal purity of icebergs and wells to puddles, fracked and poisoned rivers.

New Mexico was also very interesting to me as it was one of the first places that I worked with the Glenade water remedies with the public and they were so well received. I was entirely out of my element there, as far from the sea as I could possibly be and at high altitude. When we first arrived by the San Juan River, I was so excited to jump in but then was told about the heavy toxicity of it from the Gold King Mine spill. It was hot, which is not my favourite and the lands were so polluted and poisoned. But the people were so generous and had such a spirit of endurance with positivity it was really enlightening to be around. It took me months and months to recover from that trip but the desert remedies are slowly being explored now and the work is taking form.

Who or what are the most important influences on your art?
Water. Listening to the quiet spaces. Being able to listen in the noisy spaces. Things that flicker at the edge of my eye. Things that make my heart glow. I like to follow those paths.

What have been the greatest challenges of your career so far?
Engagement with the art world. Not many people realise that I have so few functioning hours in the day. I can be quiet sparkly when people meet me but they don’t see me when I’m sick. It’s a balance. I need people to understand my limitations — why I might continually not show up for things.

Who is your favourite artist?
I don’t have a favourite, I fall in love with artists work a lot. Olafur Ellison, Dorothy Cross, Tactia Dean and Frida Kahlo are top of my list at the moment. Also, any child that is so proud of their heartfelt work in any way, a drawing or a placing of a stone, that is something I try and tap into.

What do you like to do for fun?
Swim! 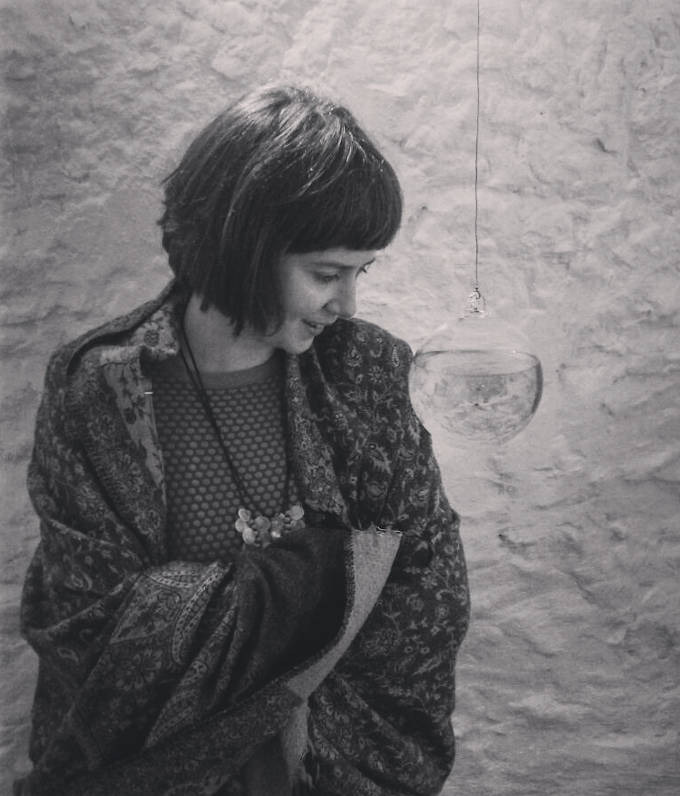 Ruth Le Gear pictured with an Installation image from Water Senses at Hambly and Hambly, Enniskillen, 2017

Water is power of the place speaking. The water is altered by everything that has passed through it; in its chemical nature as well as alchemical and its capacity for influencing us. 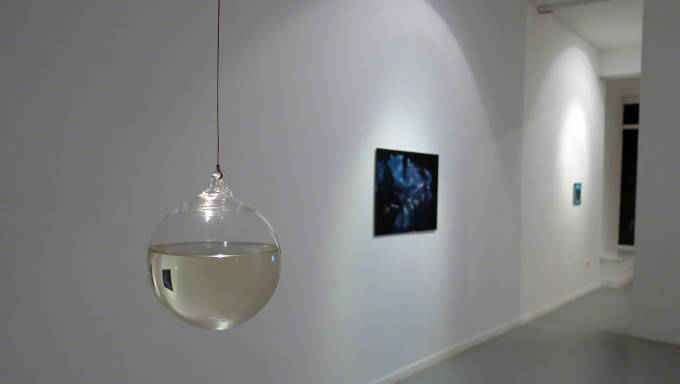 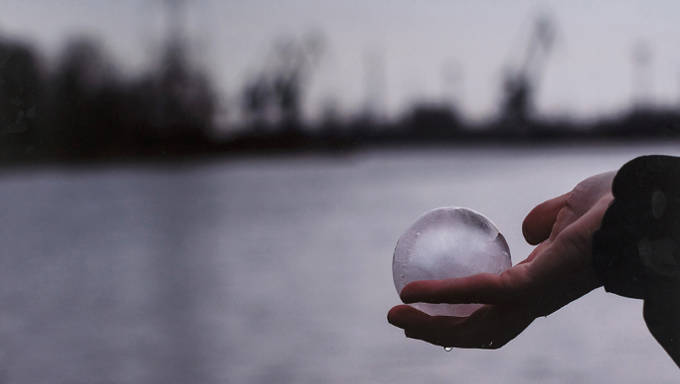 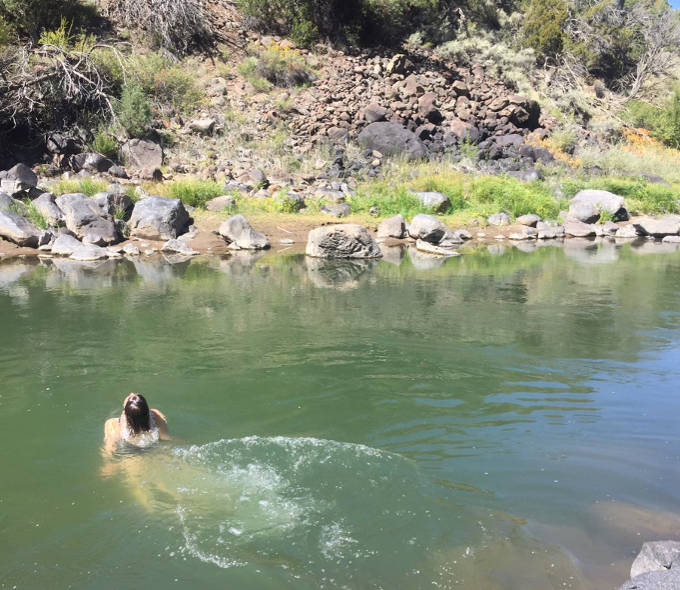 Ruth Le Gear received an Arts and Disability Connect New Work award in 2015. Ruth was also awarded the Arts & Disability Ireland and Fire Station Artists' Studios, Studio Award for an artist with a disability in 2011.

As a hybrid artist, Ruth Le Gear's practice mediates between nature, water remedy intervention, and environmental art. Her practice emerges from collaborations and fieldwork projects which examine the qualities of water and the memories held within. Le Gear works with various water bodies including Arctic icebergs, the Baltic Sea and Irish lakes and waterfalls. Her practice finds form in moving image, the still image, sound, and installation.