Mary Duffy is a visual artist based in Wicklow. Mary received an Arts and Disability Connect New Work award in 2016.

Tell us about your art.
Using oil with cold wax medium on wood panels, I paint biggish paintings that are inspired mostly by the landscape of the rare fen habitat near where I live. Through applying many layers, an image is created by layering transparent or opaque paint mixed with wax. I sometimes add texture to the paint, like ash or sand. It creates beautiful surfaces and, before it dries, this surface can be scraped, scored, scratched or gouged. Deep fissures appear and are retained or transformed by a wash of solvent or a dash of pure pigment beaten into the surface. Each skim creates a new layer that can be revisited, revised and re-worked.

Where are you based?
I live near the sea, on the east coast, in north County Wicklow.

What are you working on at the moment?
I am working on a series of paintings inspired by a megalithic tomb in north Mayo. I felt really drawn to them and I am trying to figure out how to work with these images. I am still at that flotsam and jetsam stage where all is confusing and messy. I am trying to be patient and keep at it until it reveals itself to me.

Can you tell us a little bit about your career path as an artist? How did you get to where you are now?
Before I could walk, a paintbrush was put between my toes and by the age of 5, I was acutely aware that painting is what people born without arms ‘do’. Because it was thought it was all we can do, really. I resented being put in that box, then, and I have made a sort of peace with it today. Before I left senior infants, I was sent regularly to the local tech to learn how to paint. Against all the odds I got a place at the National College of Art and Design.

Because of this, I moved to Dublin and styled my own version of independent living that was and still is, exhausting. On arrival there I was dismayed to discover that painting was considered old hat, and that my oil paints were considered bad for the floors. I was told to leave my turps outside and I was given gouache instead. Never having used it before, I was confused and really discouraged. So, I took up the media of the day… video, performance and photography. I noticed straight away that no-one ever asked me if I took pictures with my feet or my mouth, and this question is standard issue for me and really stopped me from pursuing painting for 25 years after I entered art college. Even though I still consider it an idiotic question. Like, who would ever think to ask a poet if they write with their right hand or left (as if it could it possibly make a difference)? Doesn’t all the creative action happen between the ears (for the most part)?

After graduating, I had become a performance artist. I travelled the world and got written up in a lot of fancy academic arty books. Eventually, I had to get a proper job (as my art practice was a very hungry ghost).

When I was 45, I went back to learn how to be a proper painter which I always knew I wanted to be (but had artfully managed to avoid).

If you have been a recipient of an Arts and Disability Connect Award, how has this impacted your career path as an artist?
Yes, I won a New Work award in 2016, and my application was based on my desire to negotiate a move towards studio-based painting.

Predominantly, a landscape painter, in 2016 I found myself at a point of transition. Accustomed to the wind in my face and the rain on my palette, circumstances forced me to try to work more from my memory of places, rather than directly on site. Initially I was uncomfortable with these ‘remote’ methods and it took time to become more at ease with them as a means of painting. As I began working indoors and from memory for the first time, my paintings became bigger and more abstract. This shift comes from a desire not to just paint places or things, but rather to use the paint itself to express the essence of space and place, and my response to it. Now I am allowing the paint to lead me now as much as the landscape led me in the past. Without the award, I never would have been able to navigate these treacherous waters.

Are there any stand out moments in your career as an artist?
Getting one of my enormous paintings selected for the RHA and hung right beside Brian Ballard’s work was really a stand out moment.

But I knew I had really made it when I was described (incorrectly) as British, in an Oxford History of Art book called Beauty in Art: 1750-2000. A short time later I was also described as being dead.

As an artist, I thought, it can’t get much better than any of that! But it did. Madly, wonderfully, in 2013, I got selected for the Artists’ Choice Award at Wexford Art in the Open. To be selected by my fellow artists at this great event, does really beat everything else. No contest.

What have been the greatest challenges of your career so far?
My relationship to the persistent image of artists without arms painting (bad) Christmas cards that I became aware of at the age of 5. Thankfully, after only 40 years, I got over myself… and am doing it anyway.

Now, if anyone now asks… ‘How do you paint?’

Who is your favourite artist?
I love the work of William Crozier and Brian Ballard. Both use colour very effectively to deliver great emotional intensity. Crozier’s bright colours and crazy structure, together with his energetic and expressive brushwork is very appealing. Ballard’s paintings on the other hand, while equally compelling are often moderated by a dark, deep, calm, contemplative mood which I am very drawn to.

What do you like to do for fun?
I like to cook and my speciality is to “make something from nothing…” Well, maybe not quite nothing, as I also like to grow veggies and breed traditional hens (but I don’t eat them). So, at the end of the studio day, I can be found scouring the bushes and hedges for greens gone wild in the half acre I live on.

But that is very tame stuff, really. I get my greatest fun and biggest kicks from scaring myself witless. So, in the last year, I have fulfilled a life-long ambition by learning a new skill. To be thundering along at speed, with only the power of the wind in my sails, all by myself, in the big, wide, deep Irish Sea, is terrifically terrifying, and mostly fun. 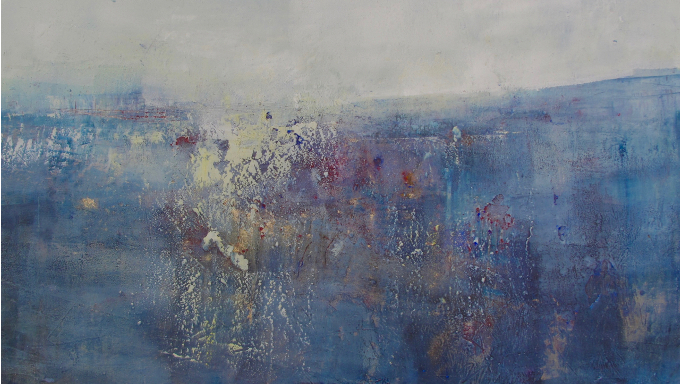 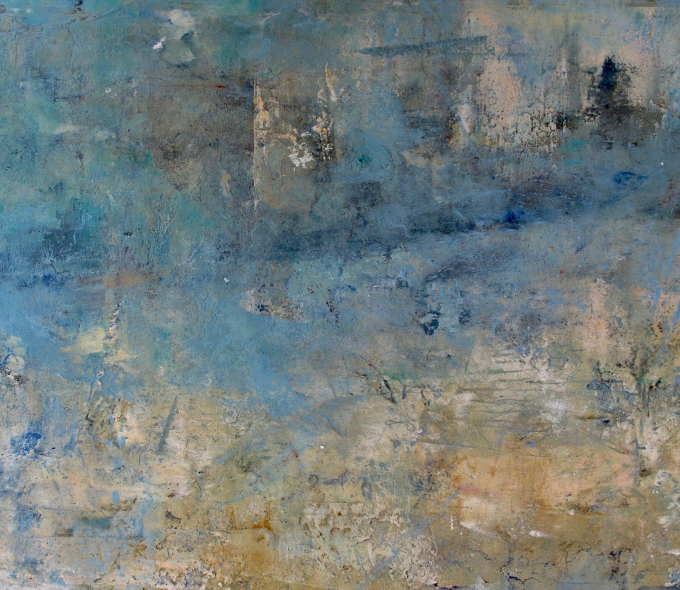 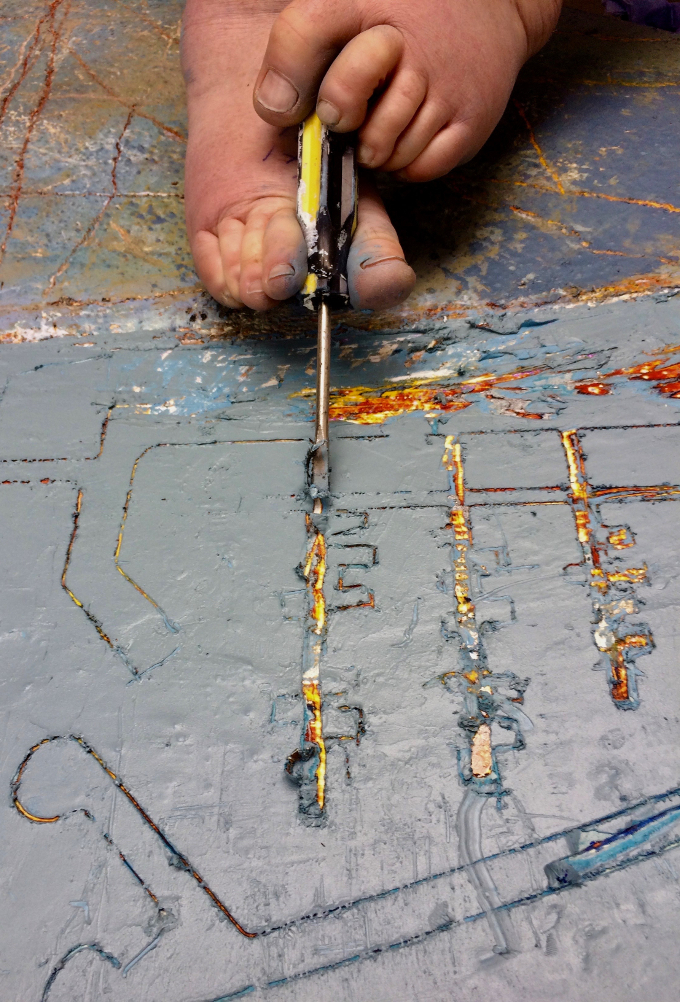 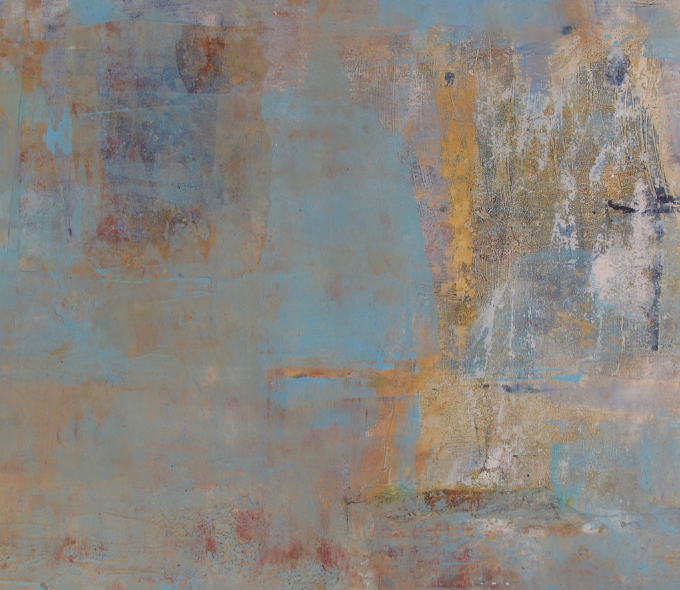 I have been an artist most of my life, and this creativity has taken many forms. On leaving school, I entered the National College of Art and Design in Dublin. It was an end, and also a beginning. I promptly gave up painting in favour of photography and video work.

On graduating in 1983, I established a practice as a photographer and performance artist. I exhibited in venues across the world, including the Institute of Contemporary Art in London, the National Museum of Photography in Tokyo and New Langton Arts in San Francisco. Since my first solo show in Limerick in 1989, I've received numerous commissions and awards, including the Gracie Fields Live Art Bursary. My photographic work was acquired by the National Self-Portrait Collection.

In the mid-1990s, I took a short creative detour into journalism and broadcasting, and over a decade ago, I turned full circle and returned to painting in 2006.