Mairéad Folan is the Creative Director of NoRopes Theatre Company. Her work explores issues such as isolation, voicelessness, domestic abuse and tension.

Mairéad received an Arts and Disability Connect New Work Award in 2018 to direct and produce Wake a new play by Deirdre Sullivan in partnership with the Town Hall Theatre, Galway.

She was also the recipient of an Arts and Disability Connect Mentoring Award in 2017 and worked with Creative Producer and Programme Manager of axis:Ballymun, Niamh Ní Chonchubhair to develop her skills as a creative theatre producer.

Tell us about your art.
I’m the Artistic Director of NoRopes, a Galway based company whose aim is to make good theatre, to challenge accepted understandings in society and the boundaries they can impose. We do this through the production of original, innovative and little known dramatic works. In addition to our desire to entertain and challenge audiences, our work is designed to invite people to think outside the box in relation to issues such as isolation, voicelessness, domestic abuse or tension. Although these issues surround us, they aren’t as visible or as audible on a day to day basis.

Each project foregrounds experiences of disempowerment or struggle and the desire for creative solutions, improved understanding and capacity-building through shared experience. We are interested in lesser-told stories, in what is left unsaid as much as what is said. Though not due to any company policy, the majority of our work since founding has been female artist led or authored.

Through our work, the company aims to pose good questions, to encourage or enable the audience to find or supply the answers. As Augusto Boal states, “it is not the place of the theatre to show the correct path, but only to offer the means by which all possible paths may be examined”.

Where are you based?
Connemara and Galway City.

What are you working on at the moment?
I’m currently directing a feminist retelling of Hans Christian Anderson’s beloved The Little Mermaid. Wake, by Young Adult author Deirdre Sullivan will be staged in the Town Hall Studio with performances on 13th-16th February (preview 12th February). Wake is Deirdre’s debut as a playwright.

Set in the Galway of today, Wake tells the story of sisters Caitríona (Tara Breathnach) and Mara (Orla Ní Thiobraide.) Mara has gone missing and has left a mystery in her wake. Caitríona examines her loss and love, her anger and pain. What little Mara has left behind her is woefully inadequate to help her older sister cope – memories of a childhood story and of the increasingly-strained interactions the pair shared in the months leading up to Mara’s disappearance, coupled with Caitríona’s fear of a devastating possibility.

Deirdre and I share a strong theatrical history, having attended Speech & Drama and Galway Youth Theatre together before both doing the MA in Drama and Theatre Studies course at NUIG. We also share a long-time fascination with fairytales and in particular, the story of The Little Mermaid, who willingly gave up her life under the sea for a chance to be loved by a human prince, only for the love to be fatally unrequited. Such tales persist and develop over time, bearing, re-shaping into different forms in order to reflect different political and personal views, eras and cultures. Like Deirdre’s critically-acclaimed collection of thirteen dark retellings of traditional fairytales Tangleweed and Brine, Wake is inspired by the local landscape of rural Galway, by its isolated places, where unsolved crimes can happen, and people can go missing.

Can you tell us a little bit about your career path as an artist? How did you get to where you are now?
I have an acting background. My introduction to theatre happened when I was six years old. There was an Irish dancing class happening after school that I wanted to attend. To my chagrin, I wasn’t able to due to my disability. As a result, my mother sent me to the Garvey School of Speech and Drama where I did the Irish Board of Speech and Drama grade exams and the London College of Music Acting Diploma, under the watchful eyes of Orna Garvey. My first theatre experience was watching a Little John Nee show in the Galway Arts Festival. I wanted to be him… actually, I still do!

Previous to founding NoRopes, I worked as a freelance theatre maker since 2005 and worked with companies such as Fíbín and Taibhdhearc na Gaillimhe during this time. I also hold a MA in Drama and Theatre Studies from NUIG, a MLitt in English from NUIG which researched the development of Irish Language Theatre in the West of Ireland 2003-2013. I am currently a Board Member of An Taibhdhearc.

Previous NoRopes productions include The Open Couple by Dario Fo and Franca Rame and the Irish premiere of Wasted by Kate Tempest. I finished touring my debut play Meet Luke around Galway and Dublin with great success in November 2018.

If you have been a recipient of an Arts and Disability Connect Award, how has this impacted your career path as an artist?
My experience with the Arts and Disability Connect scheme has been great and has exceeded my expectations. I was fortunate to be awarded a Mentoring award in 2017 and a New Work award in 2018. As part of my Mentoring award I worked with Producer Niamh Ní Chonchubhair and through the New Work award I am partnering with Town Hall Theatre. NoRopes has a stronger national profile as a result but most importantly I now put a value to my work as a professional artist, a value which was often forgotten about in the past. My advice for any present or future recipients is to grab the opportunity with all your strength but above all be open to any opportunities/changes that may occur throughout your time as an Arts and Disability Connect scheme awardee. Think big, go out of your comfort zone and the rewards will be in reach.

Who or what are the most important influences on your art?
I am often attracted to works where one or more character traits hit me in the core and I start wondering how to portray this onstage. I sometimes do the same when I’m reading novels. I guess it’s a side effect of my acting background or just another Mairéadism.

Wake is the first time that I have collaborated with a playwright. Both Deirdre and I wanted to tell a story of sisterhood and the sea, because those are things that resonate with both of us about the place we come from. Sadly married to that is the disregard for women’s lives that permeated the country at the time of writing. Wake explores the unspoken. The gaps that are left behind when someone leaves. The answers we build ourselves.

What have been the greatest challenges of your career so far?
Like most young theatre companies it has been the lack of funding. On a personal level it used to be the limitations that I would put on myself over the years. One major limitation was my self-doubt as a professional artist.

Who is your favourite artist?
DAVID BOWIE can do no wrong in my eyes and my biggest regret is not seeing him play live.

Theatre-wise: I have to say Wake’s cast and crew. I’m so lucky to be working with a talented bunch of artists. My style of directing is very collaborative in that the end vision is a combination of cast and crews’ visions. I find that this approach gives a production an extra sense of credibility and as a result, the audience gets a more authentic experience.

Another theatre artist that I admire is the British performer/playwright Laurence Clarke. His show An Irresponsible Father’s Guide to Parenting was the highlight of my 2018 Edinburgh Fringe experience. Laurence has the brilliant ability of balancing difficult issues and comedic banter whilst still maintaining the gravity behind these topics.

What do you like to do for fun?
Reading, hanging out with friends, playing The Sims and the board game T.I.M.E Stories.

Think big.
Go out of your comfort zone and the rewards will be in reach. 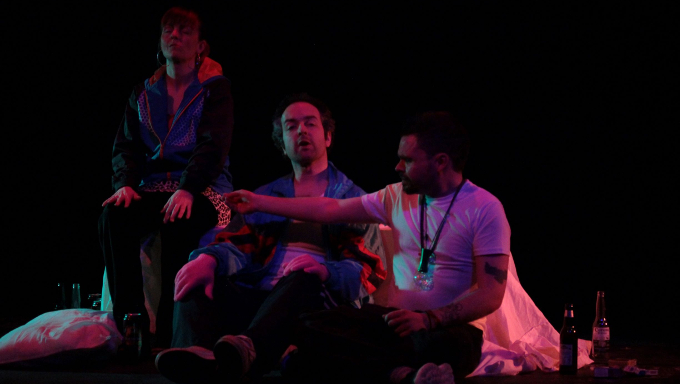 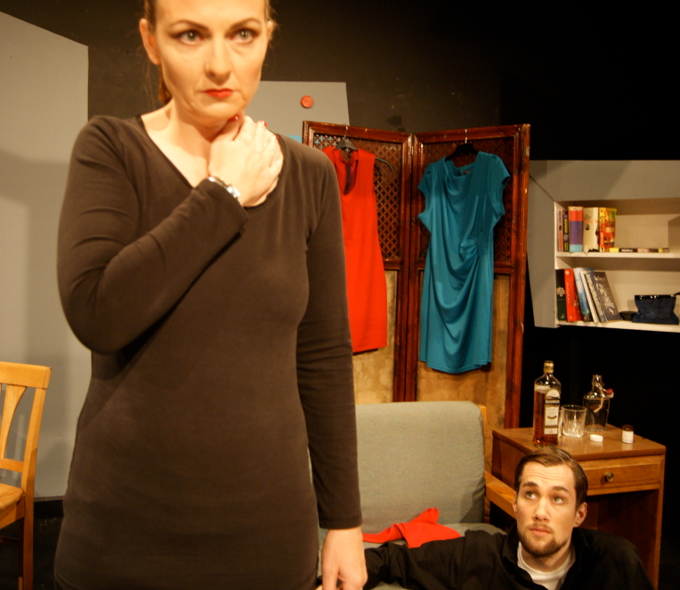 Mairéad Folan received an Arts and Disability Connect New Work award in 2018 and Mentoring awards in 2017 and 2020.

Through a mentoring award in 2017, Mairéad worked with producer Niamh Ní Chonchubhair. Mairéad and Niamh examined the role of creative theatre producer and how that informs Mairéad’s artistic practice as a director.

Mairéad Folan has been awarded a New Work award to present WAKE at Town Hall Theatre, Galway – a retelling of the Little Mermaid, developed in conjunction with award-winning Young Adult Fiction author Deirdre Sullivan. Voicelessness is at the heart of the Little Mermaid and WAKE explores the unspoken, and the various forms in which we tell our stories.

Mairéad is a Galway theatre director. She holds an MA in Drama and Theatre Studies from NUIG, MLitt from NUIG which researched the development of Irish Language Theatre in the West of Ireland 2003-2013, a Diploma in Acting from London College of Music, trained with the Garvey School of Speech and Drama and Galway Youth Theatre. She founded NoRopes, whose aim is to challenge societal boundaries through the presentation of innovative and little-known dramatic works. Previous productions include The Open Couple by Dario Fo and Franca Rame and the Irish premiere of WASTED by Kate Tempest. She is currently touring her debut play Meet Luke around Galway and the tour will finish in Dublin in November. Mairéad was recently appointed onto the national Irish language theatre, Taibhdhearc na Gaillimhe's Board of Directors.’

Through a Mentoring award in 2020 Mairéad will work with theatre maker Little John Nee while she develops a new script.