A powerful landscape. A tale of twists and turns

Be carried away on a wave of music and song as the Black Box booms with thunderous sounds made by instruments in disguise. Internationally renowned artist and composer Jez Colborne, takes you on a journey to beat the Trickster and get back to the people who were left behind. A powerful soundscape that tells a tale of twists and turns. Be immersed in this awe-inspiring musical experience inspired by Jez’s fascination with all things industrial.

International artist and composer, Jez Colborne was commissioned by Ignite to work in collaboration with Galway-based project That’s Life and the Town Hall Theatre to create an awe-inspiring musical experience entitled Trickster.
Trickster was performed in the Black Box Theatre over two nights in October 2014, featuring artists, musicians and performers with disabilities from That’s Life, an arts and disability initiative from Brothers of Charity.
Trickster is inspired by the stories of Odysseus and sparked by Jez’s fascination with making music using sirens, foghorns, cranes and all things industrial.

This unique work is one of three “Ignite” commissions which represent the largest ever investment in Ireland’s arts and disability sector. Ignite has been designed to generate Ireland’s most ambitious showcasing of talent from people with disabilities, led by international and Irish artists and performers with disabilities, with projects taking place in 2014 and 2015 in Galway, Mayo and Cork. These commissions each represent an investment of up to €60,000. 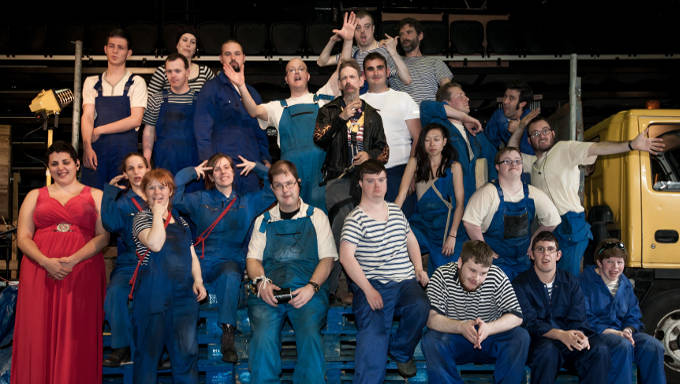 The cast of Trickster who performed at the Black Box, Galway, October 2014 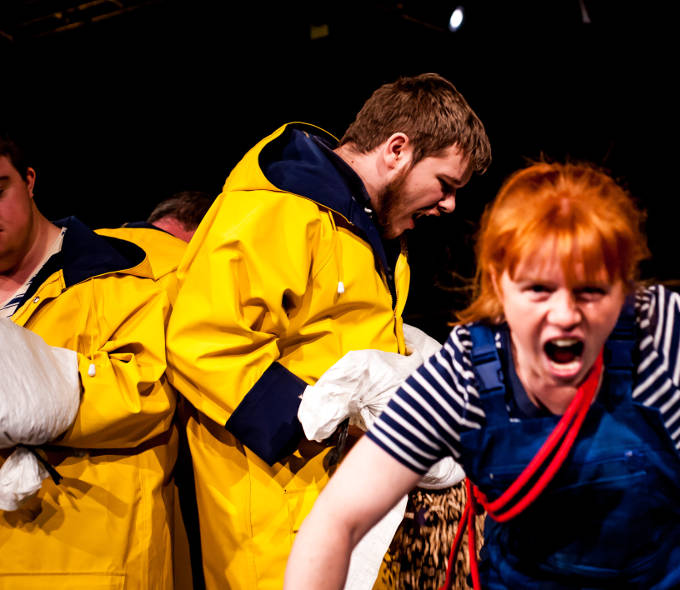 A scene from Trickster at Black Box, Galway in October 2014 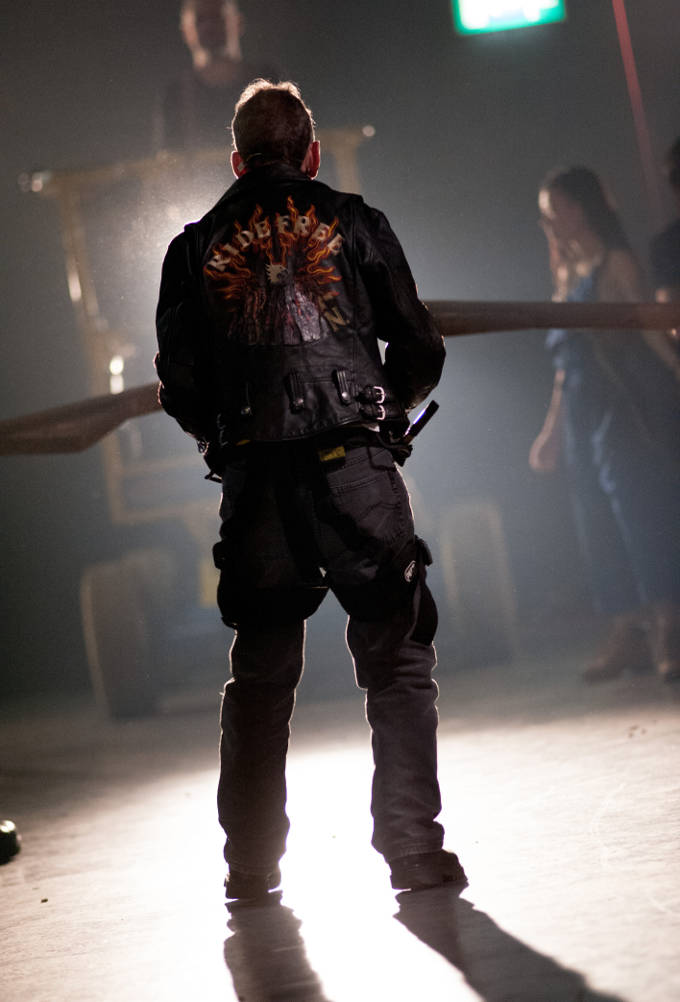 Click here to watch this video with audio description

A scene from the live performance of Trickster at Black Box Galway, October 2014

Jez Colborne is an international artist, musician and composer.

Jez could sing before he could talk! He has been working with Mind the Gap since 1998 after being discovered at an Arts Festival in his hometown Nottingham. Collaborating on a wide range of projects with diverse artists, Jez always aims to create something no one has created before. He challenges people’s perceptions of artists who have a learning disability and ultimately create a world of positive chaos!

Music is Jez’s passion and he is interested and inspired by rock, contemporary and world music as well as non-traditional instruments such as sirens, shipping containers and foghorns!

“I’m absolutely mad about objects that create unusual sounds. My passion began with my fascination in wide-area warning sirens, like the type they use in quarries to signal that they are going to blast or in a petrol-chemical plant to warn the people around if there is a disaster. When I was a kid there was a part time fire station near me, it used to go off every morning and afternoon.

Jez’s anxiety around sirens became instrumental in creating his first commission -Irresistible. Whilst on tour with Mind the Gap, Jez confronted his fear and researched different sounds sirens made.

“I felt that as a musician – even though it might be harsh for my ears – there are loads of tones to them and they all have their own voice; just really loud, like an opera singer. I started listening to them as musical instruments, my fear went away and I started to be more and more interested in them.

My project Irresistible involves using lots of types of sirens to create a symphony. It brings a whole new meaning to the word siren, mixing them with choirs, bands and lighting to make sirens the star of the show.

It’s about using danger, excitement and risk to create a new piece!”

Jez exploded onto the music scene with Irresistible at the London 2012 Olympic Games when all the eyes of the world were watching. Since, it has toured across the world from places around the UK to Beijing, Wales, Switzerland and Germany. It has also inspired Jez for two new pieces of work – Gift and Trickster.

Gift and Trickster follows the tales of Greek Mythology, the Trojan Horse, of Odysseus – a man on a journey, a long way from home.

Gift is a new show commissioned by PRS for Music Foundation’s New Music Biennial. It is uniquely developed from Irresistible but taking the inspiration behind exploring new instruments. Instead of sirens, Jez is creating work in, on and around a shipping container. Investigating different ways in which he can use it to create diverse sounds.

It represents another chapter in Jez’s journey as a learning disabled musician, inspired by working with MA students from Leeds University he wanted to discover what it feels like to be contained and what that means.

“I want the audience to go through a mix of emotions, from wary and confused, to elation and amazement. It will be 15 minutes of new and exhilarating music.

Trickster is the next part of our story, but an entirely different kettle of fish!

The container travels to Galway, Ireland, and opens out into a ginormous space with endless possibilities for movement, dancing and performance. It’s more a music-performance piece with a bigger cast. It’s going to include all my experiences of Galway, the industry, the weather and being stranded on Inisheer with really cool people. They all had different stories to tell, in the middle of a storm, it was such a powerful experience!

I really enjoy meeting new people with different and diverse cultural backgrounds, they become part of my story and I weave them into the work I produce in collaboration with Mind the Gap.”

Jez currently resides in Nottingham with two friends and his cat Felix.

It was formed in 1988 by current Artistic Director Tim Wheeler and Susan Brown and is based in Bradford, West Yorkshire.

Mind the Gap brings together learning disabled and non-disabled artists so that they can share and exchange ideas, skills and experience. The talents of learning disabled artists are nurtured through formal training and live work experience. Through a partnership approach we create work for different audiences that is exciting, refreshing, sometimes a bit cheeky, and always original.

“We, at Mind the Gap, are so excited that Jez has this fantastic opportunity to realise his musical vision to create extraordinary, radical, new music which portrays his unique view of the world,” says Tim Wheeler. “Opportunities like the Ignite Commission are fundamental in shaping the international platform for artists with intellectual disability.”

Read more about Mind The Gap

That’s life is an arts, leisure and personal development programme of Brothers of Charity Services, Galway.

Town Hall Theatre Galway, incorporating the state of the art 400-seater Main Auditorium and the 52-seater Studio Space at Courthouse Square, and the nearby, multi-purpose Black Box performance space (up to 600 seated, 800 standing) on Dyke Road presents an extensive and eclectic mix of theatre, concerts, musicals, dance, film, comedy and family shows year-round. The venue is open 362 days a year and 15 hours a day on average. The venue attracts audiences in excess of 100,000 annually (close to 2 million since we officially re-opened on 1st February 1996) making it the most successful theatre of its size in Ireland.

Each year, the venue is the epicentre of activity for virtually all of Galway's key festivals and cultural events including Galway International Arts Festival, Galway Film Fleadh, Cuirt Festival of Literature, Baboro Children's Festival and Galway Comedy Festival to name but a few. Druid have premiered many of their acclaimed and award-winning productions at the venue before embarking on national and international tours including successful Broadway and West End runs, and an increasing number of Galway International Arts Festival's own productions tour the world following premieres at Town Hall Theatre and Black Box. Acclaimed for consistently delivering the best of national and international talent year-round to Galway audiences, the venue's programme proudly features the work of many performers, companies, musical societies and arts organisations (both professional and amateur) from across the city and county.