You are here: Home / Artists / Commissions / Curated Space / The Finest Specimens of Fossilised Duration / Ode to Sweeney’s by Philip Kenny

Ode to Sweeney’s by Philip Kenny

I am a writer, artist, performer, and autistic advocate from Dublin. I was diagnosed with Asperger’s syndrome early in my youth and had to overcome many significant developmental delays both in learning, cognition, sensory processing and motor coordination and speech. I come from an artistic background; my father is a professional painter and my mother has a background in drama teaching. This has lent a significant influence in my synergistic view of art and culture.

In 2009, I graduated from Maynooth University with a BA in Philosophy and English. The two subjects are a reflection of my love of ideas, narrative and the structure of ideas respectively. I was a senior volunteer at Exchange Dublin from 2009 to2013. I performed spoken word at KnockanStockan independent arts and music festival from 2011 to 2019.  I performed poetry at Electric Picnic 2017 and 2018. I wrote and performed works concerning my development with Asperger’s as a part of Towards the Consideration of All Bodies at the LAB Gallery in 2018. I was awarded the Arts and Disability Connect Mentoring award from Arts & Disability Ireland in 2019, which granted me the opportunity to work with a professional writer to develop and hone my craft and to further develop my writing career.

For The Finest Specimens of Fossilised Duration, I created the film Ode to Sweeney’s in collaboration with different people including Bob Glynn as director, Ruth Kerr as director of photography and editor, Jef Jef Jef and Shazbot as lighting designers and David Griffin as sound designer.

The film is based around a poem I wrote about a once thriving music arts venue called Sweeney’s, a bar which was formerly based on Dame Street in Dublin. This venue was a flourishing space for just about every kind of art imaginable and many people were sorry to see it close. Given the current precarious situation of venues, it seemed like the right time to create this piece. It is at times, abstract, surreal, irreverent, and chaotic, which was at least in part,why the place was loved so much. The energy of the poem varies from bouts of absurdity to the frantic lows of those who engage in life with a certain sort of reckless bravery. However, most of all Ode to Sweeney’s is reflective and its’ tone deeply appreciative. It is an homage to a place that was a home and adoptive family for many and a creative, alternative influence that has persisted long after its doors have closed. For me, most important of all was that it should be a reminder, especially now, that the community and spirit of such places reside in people, their connections, relationships, and friendships no matter how great or small. Such things do not end by a closing of a physical space, they remain waiting for an opportunity to be revived and thrive once more.

Ode to Sweeney’s
by Philip Kenny

A unique island
in a sea of madnesses
offered refuge for the mad
and found in their number
they were now alone no longer.
For a time were comforted.
They may have been
no greater or weaker upon entering
(or leaving for that matter)
but for a time
didn’t consider of what its shape or manner
their facades were composed.

Singular mass
Oceanic insanity
Provided safe haven for fools
Digits coalesced and obtained
Loneliness interrupted
Unassailed by fear
Nothing was tangibly different
upon arrival
Temporality was not aware of any
distinctions it had.

Playing squash with words
for want of a better verb
A smell has been collecting
in the rear of the pub
some have drank tea
for two hours
usually the same
long cooled cup.

Outcomes and welcomes
are usually worn out
by the end of the night
The legless somehow walk
as though newly arisen
It seems like the talk
has diminished to naught
with nowt but the hold out
of a drunk
and/or stoned mumbler.

Random daft
Three floors
split
A trigram of yangs
Abundant and creative
Ends in the early morning
Cloudy, earthed and ying-ed to bits
Even the shutters
now drawn
a post shift pint
poured for their relief
is marred
by the jarring jembe
of a beloved lane hippie
consummately
consumed
in the
one of
Ohm.

There’s a potent possibility
that no one will go home
even with the close proximity
of the sun to arrive in 3 hours!!

Some sleeping may occur
And Glynn may play
some g-tar
If he fancies it
Maybe a few trad choons?
Definitively
An auld triangle
and tangles
of beatific hair ribbons
to make these mostly laties/90’s babies
Reminisce on romantic Ireland
Dead and gone.

I call and the day
seems all but unnecessary
until the night falls
Understanding and misunderstanding
become the very basis of many an enduring friendship.
The works and idlesnesses
of the many become
streamed from the one source
with enough encouragement
all will be levelled this night.

The pains of dark
partydwellerdom
will strike an all
too united note
when the morning comes.

When the morning comes
and all the glass has been swept
the shutters rise
like an open mouth
ready to inhale
over a days course.

Was it reggae last night
or jazz?
Everybody danced regardless
no old crowds or new crowds here.

There are varying degrees
of love and enmity
egosity, tomfoolery.
Enough occurring
we consider coining
our own adjective
Somewhere out
past the back-o-beyonds.

Far away from Shenanigan
nor a mile of devilment
some would rather listen
to a drunken professional musician
than some young lads
half alright rendition of laylaaa!

It’s open mic season
and with a beer of a Tuesday night
it’s got the airs of the extraordinary
and otherwise all too ordinary
condition of sucking
really bad.

I dance really badly
purposefully out of sequence
to some number far slower
than my feet
With the relative condition
of shame overcome
the ice broke, melted
and all remembered come tomorrow
nothing would be
All was now.

I made myself arise
and take account
made no promises
to achieve a single thing
and it occurred
as it was supposed to be.
Everything presented itself
with no plan of mine to interfere
T’would be washed away anyway
reduced in reverse distinction
non-differentiation
destruction by another name.
The mirror showed the viewer
what it wished, granting it
little and much
There were no poverty and richnesses here
just those who saw and believed
and those who merely watched
without saying a word
Those who were unlearned
were considered lucky
silences uninterrupted
Perhaps a supreme blessing
a different path
albeit to those who had to wander for
some long unaccountable epoch,
becoming disenchanted
and dissatisfied looking for
the answers they were
convinced to be correct
But not some dull blankness
but a balance of ordered
chaotic forces,
with no strict place in the world
to exist or not to exist.

A storm with a calm eye
by necessity,
a body
with an I and me
and its heart
Moving and rattling
and shaking everything
up simply by being near
Consumed by torrents
producing torrents
and for a long time
unaware
of the casual connection
spurred on
by it simply being there.

With special thanks to Creamy Sonic Studios for the archive footage.

Commissioned by Arts & Disability Ireland as part of The Finest Specimens of Fossilised Duration edition of Curated Space in 2020, curated by Róisín Power Hackett.

With support from the LAB Gallery and Dublin City Arts Office. 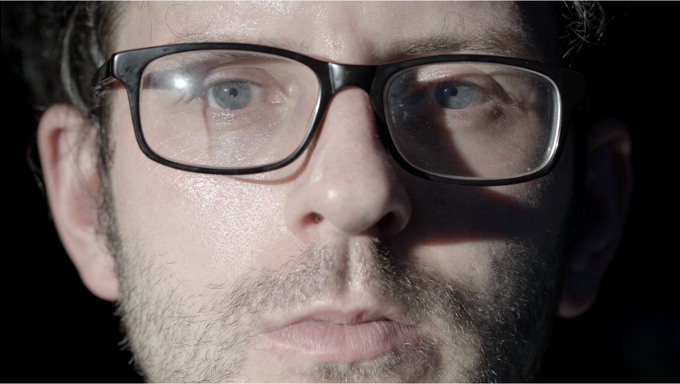 [Image description]: Close-up photo of a man with pursed lips and the beginning of a moustache and beard. His clear blue eyes are framed by dark-rimmed glasses which are perched slightly unevenly on his nose. He looks directly at us. 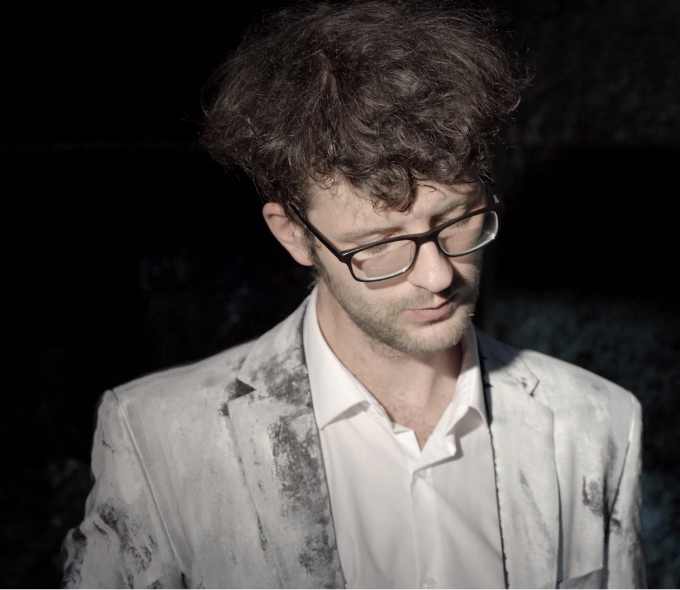 [Image description]: A man with mussed-up hair, white shirt open at the neck, and bleached-out blazer. He gazes downwards, as though looking at something in his hands, beyond the frame of the picture.

Ode to Sweeney’s written and performed by Philip Kenny, 2020 with audio description introduction 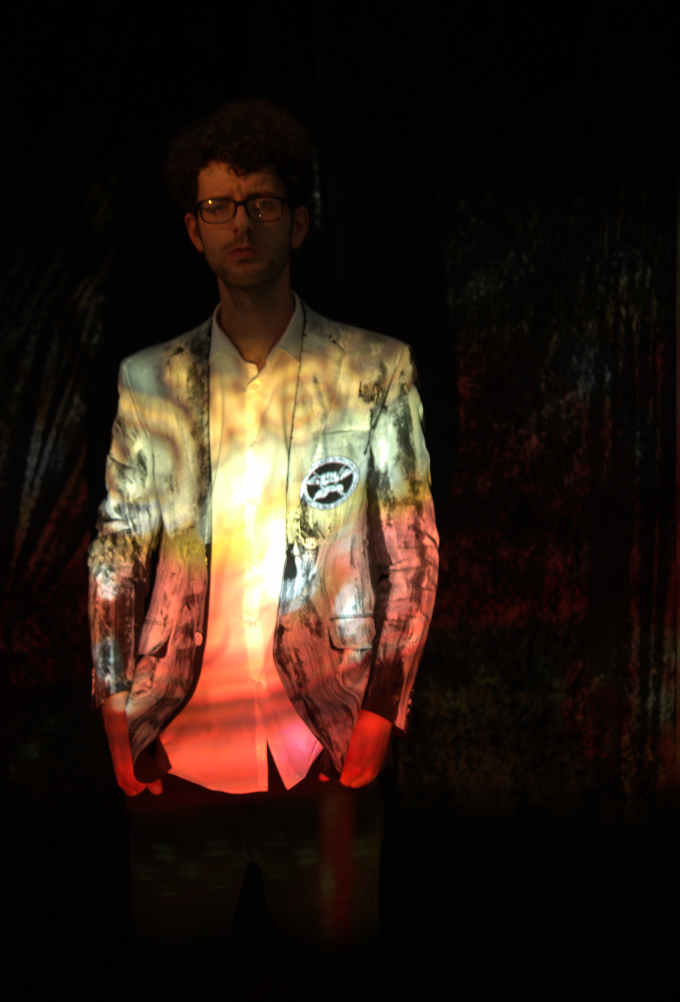 [Image description]: The man with dark-rimmed glasses stands in a darkened corner. Blurred, coloured images are projected onto his pale clothes and the wall behind him. Yellows and blues around his shoulders, blending into orange and red around his waist. His hands are tucked into the pockets of his jeans as he looks at us intently. He stands tall, his lips pursed.

Ode to Sweeney’s written and performed by Philip Kenny, 2020 with open captions

[Image description]: A light, washed-out image. A man’s right hand held open, palm upwards. Resting on his palm is a lined notebook with a tattered cover, dog-eared at the corners, in sharp detail. The man’s white shirt and pale jacket are in softer focus in the background.