Suzanne Walsh is an artist and writer who works with music, performance and text.

As part of our Meet an Artist series of interviews, this month we chat to Suzanne Walsh. She is a resident in Fire Station Artists’ Studios in Dublin. Her work often explores themes of the human/animal ‘divide’, and the performativity of language. She also writes essays, poetry and art reviews.

What is your name?
Suzanne Walsh

Tell us about your art?
I work in what is called a ‘transdisciplinary’ way, but mainly with writing, performance and audio, sometimes installation. I make performances with spoken word and music, in a gallery context, but I often perform for literary or music events also. I also publish writing both in art and literary contexts.

Where are you based?
In Dublin, currently in residence at Fire Station Artists’ Studios.

What are you working on at the moment?
I’m collaborating with photographer Hugh McCabe for a show called Lost State in Draíocht Arts Centre this October. I’ve written poetic text using remnants of computer language, which will play as audio tracks in the gallery. I’ve recently performed audio/musical performances for the Irish Museum of Modern Art (IMMA) Summer Party and for Culture Night in The Model Gallery in Sligo. The IMMA performance was an invocation called The Language of Birds, using latin and bird sounds, and on Culture Night I made a musical and text performance that took part in different rooms in the gallery, requiring the audience to move with me. I am currently working on a research-based commission by IMMA on the history of the ROSC show with writer/editor Nathan O’Donnell and poet/poetry editor Christodoulos Makris. This is text based, and will be presented at an event in IMMA in November. I am always working on my own self-directed work too, at the moment I’m archiving my past works and writing.

Can you tell us a little bit about your career path as an artist? How did you get to where you are now?
It was not a straightforward path; I went back to college when I was a mature student. Before that I’d been involved in theatre and music, which has been very useful for my current work. I graduated from the National College of Art and Design (NCAD) in 2011 where I studied sculpture and art history. In 2013 I went back to NCAD to do a theoretical Masters called Art in the Contemporary World. I had a mentorship with Karl Burke in Fire Station Artists’ Studios which was really helpful, and a commission last year for a show A Different Republic co-curated by Fire Station Artists’ Studios and Arts & Disability Ireland with the LAB Gallery, which was another important step. I also edit on a small art publication (Critical Bastards) and collaborate with other artists frequently, which keeps me open to new ways of working.

Are there any stand out moments in your career as an artist?
I think they are always happening for me. Performing in IMMA last year with the sound group I work with (called Hissen) was special, and also bringing my writing practice into a gallery context last year with A Different Republic at the LAB Gallery.

Who or what are the most important influences on your art?
They are many and diverse, I’m as influenced by literature, ecology, and music as art. I’m interested in a lot of posthuman discourse (challenging our subjectivity in relation to non-humans e.g. animals, plants, computers).

What have been the greatest challenges of your career so far?
I think just keeping going when it’s not going so well. For example I have struggled to find housing in Dublin in the past, as well as space to work. Maintaining faith in yourself in the earlier days before there is outside interest in your work, and balancing a sometimes harsh inner critic.

Who is your favourite artist?
I admire many artists, for example Laurie Anderson and Tacita Dean interest me in their approaches both in subject and form. Otherwise an ever evolving/revolving cycle of others, writers and musicians as well as visual artists, often some of these are friends and peers also.

What do you like to do for fun?
Just hanging out with friends; going to shows or playing music. I’m part of a wildlife rescue group, it’s not always ‘fun’ but really stimulating.

Biography
Suzanne Walsh is an artist and writer who works with music, performance and text. She is a resident in Fire Station Artists’ Studios in Dublin. Her work often explores themes of the human/animal ‘divide’, and the performativity of language. She also writes essays, poetry and art reviews.

Suzanne was commissioned, along with Aideen Barry, Amanda Coogan and Corban Walker to create a series of new works for A Different Republic which explored universal human rights in a year of commemorations.

The exhibition, co-curated by Arts & Disability Ireland, Fire Station Artists’ Studios in partnership with the LAB Gallery ran from 18th November 2016 – 5th February 2017 at the LAB Gallery on Foley Street. 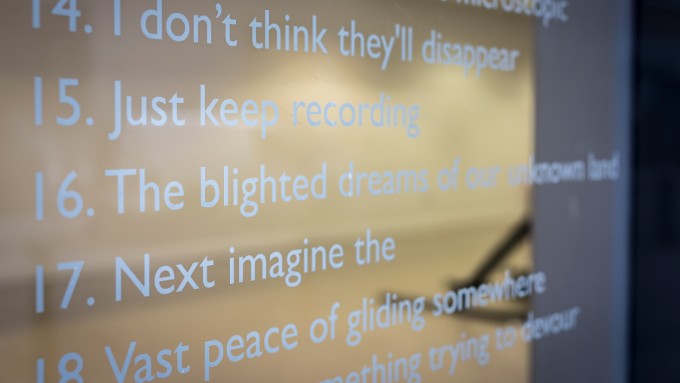 (The stand out moments) are always happening for me. Performing in IMMA last year with the sound group I work with, Hissen, was special, and also bringing my writing practice into a gallery context last year with A Different Republic. 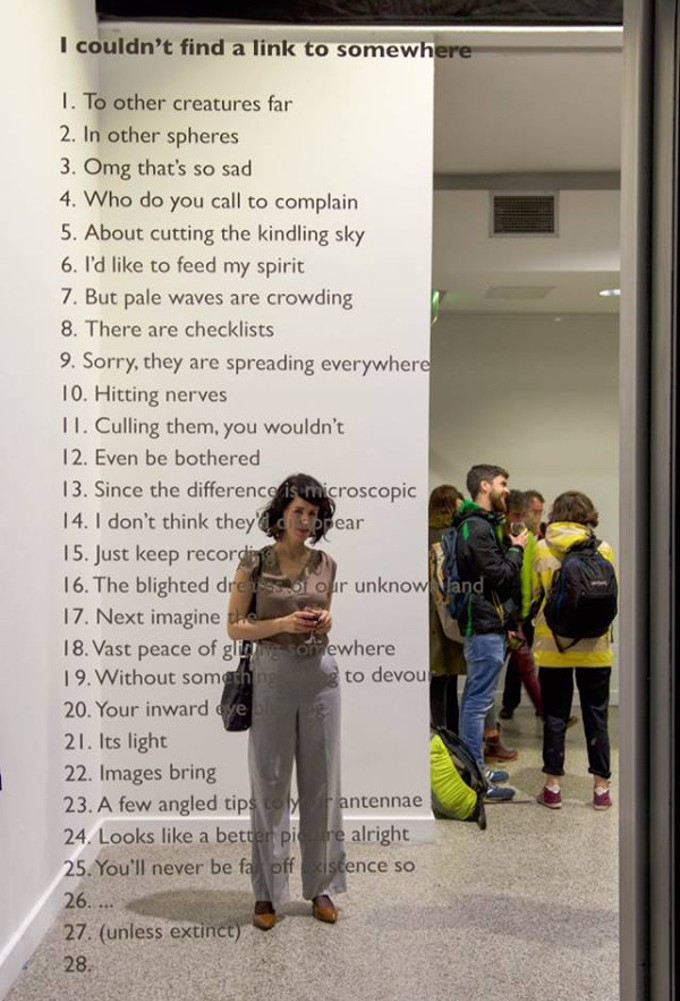 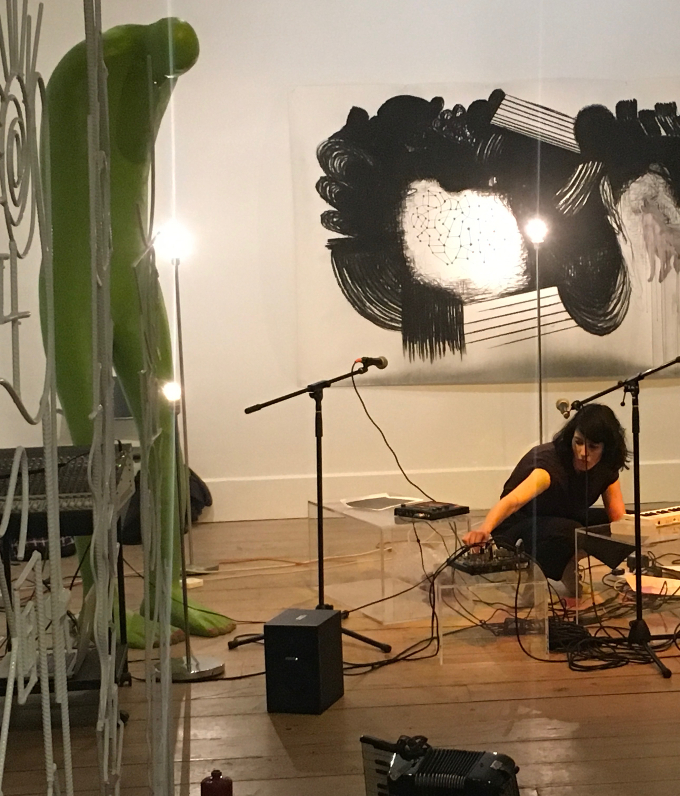 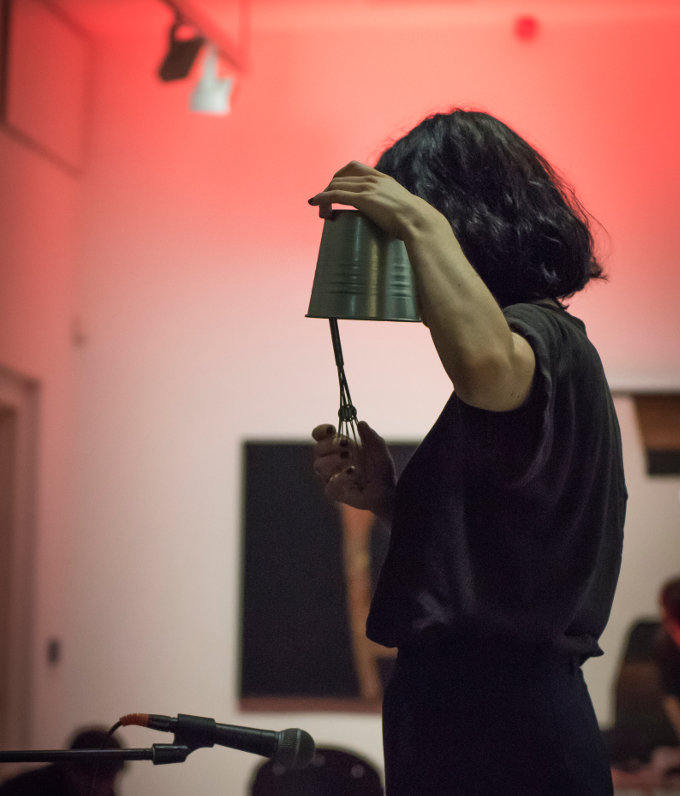 Suzanne is an audio/visual artist and writer from Wexford currently based in Dublin. She uses performative lectures, audio performances, and text to explore various themes, often around the relationships between animal/humans, ecology and evolution as well as querying the borders of the self. She also collaborates with filmmakers, musicians and other artists frequently, drawing on previous acting and musical experience. Recent performances in Eight Gallery, IMMA and DLR Lexicon (with Hissen sound group), New Lacanian School Congress, The International Literature Festival, and Art and Ethics Symposium at the Burren College of Art. She also recently completed a writing commission for Resort Revelations residency for Fingal County Council and a residency at Fire Station Artists' Studios.

Through a Mentoring award in 2020 Suzanne will work with writer Christodoulos Makris while she focuses on her poetry practice and explores publication possibilities.